‘Yes’ to corporate justice. And ‘yes’ to accurate facts.

The clear "no" to the termination initiative shows that Switzerland wants to actively shape its future in Europe. It’s high time for the Federal Council and the parties to overcome their inaction on the European agenda and take up the task of shaping our relations with the European Union.

Enterprises must be responsible for their business. The aim of the initiative is self-evident, and the opponents unsurprisingly lack sound arguments. As a result, they do not hesitate to mislead voters with largely made-up stories and fake news. Operation Libero can no longer accept this and is ready to take the field.

Many claims by the opponents are simply inaccurate: a poster published by an allegedly liberal party incorrectly states that the proposed civil liability rule would cover all suppliers to Swiss small businesses. Other legal fairy tales suggest that the burden of proof would be reversed, or that Swiss law would be exported abroad. Such statements are in blatant contradiction with the actual text of the initiative. By doing this the opponents are undermining Switzerland's political debate culture and damaging the credibility of our economic policy in the long term. Operation Libero calls for a substantively correct and fact-based campaign. This is essential for the proper functioning of our direct democracy.

No uncharted territory. No bureaucracy.

From the perspective of Operation Libero, the initiative follows a sensible approach that focuses on prevention, namely by introducing an obligation to undertake human rights due diligence. Moreover, the initiative draws on a tried and tested concept of Swiss civil law: the so-called ‘liability of the employer’ principle. An enterprise should be liable if its business activities violate internationally recognised minimum standards in terms of human rights and environment protection, and thereby cause damage.

The initiative incorporates due diligence and risk management processes that are already widely used by many corporations. The duty of care provided for in the initiative text is pragmatically designed and can be realistically implemented, as its scope depends on the size and entrepreneurial risk of the enterprise. Moreover, the proposed approach is unbureaucratic, as the government does not monitor compliance with this due diligence. No additional control authorities or monitoring procedures are created.

An action can be brought before a Swiss court only in the case of losses directly caused by the business activities. The injured party must prove the responsibility of the Swiss enterprise, which will be certainly exempted from liability if it can show that it had undertaken the appropriate steps to prevent the harm.

For a fair competition between Swiss corporations

Another good reason to support the initiative is to ensure the functioning of a free market economy. If individual companies gain advantages by breaking the rules of the game without consequences there will be market failure. By laying down clear rules for corporate responsibility, the Swiss constitution will ensure that Swiss corporations are treated equally and that competition in Switzerland functions properly. The initiative creates incentives for responsible behaviour, and thereby strengthens the reputation of Swiss enterprises and Switzerland as a business location.

Freedom and responsibility are inextricably linked in a free-market economy. No argument in the world can override this principle. One might fall for the flimsy arguments of the opponents. One might be against the initiative because one has received too little information or is confused by false statements. But anyone who seriously believes  that effective due diligence to avoid human rights infringement is unnecessary or extreme can only be one thing in the eyes of Operation Libero: a scoundrel. And because we are not scoundrels, we are campaigning for ‘yes’ vote on the Responsible Business Initiative on 29 November. 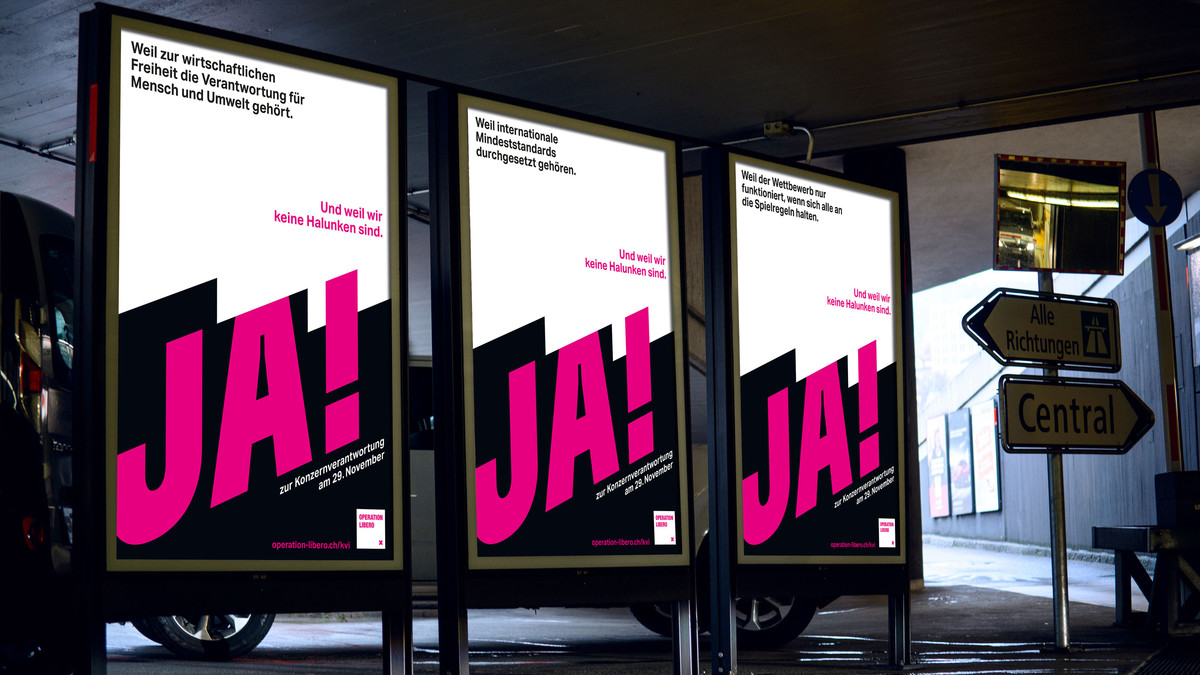