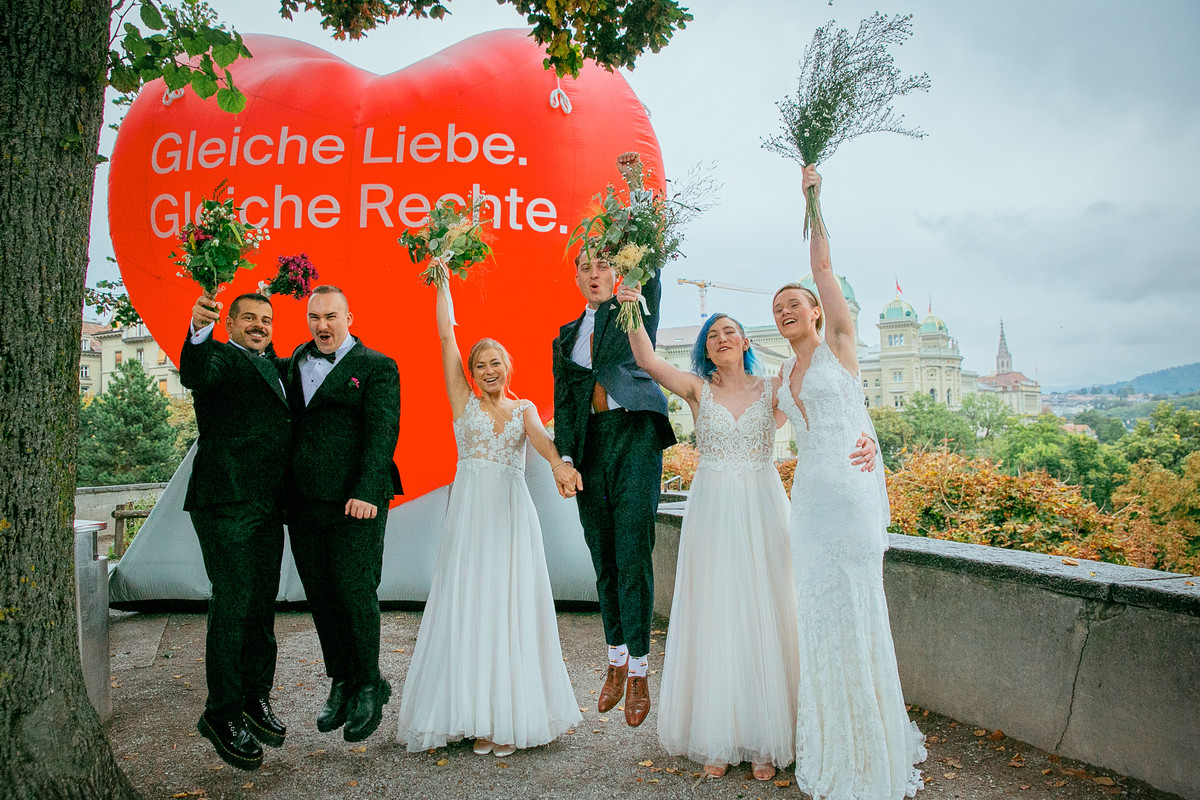 The clear ‘yes’ to marriage for all is an important victory towards equal rights, but only a stage victory on a long path towards equality. We gratefully accept the accusation of salami slicing: marriage equality is by no means the last slice of salami in terms of equality of all lifestyles. The state still privileges certain types of relationships and lifestyles over others. That is why we want to tackle the next slices of the salami as soon as possible.

26 September marks a big step for Switzerland: after far too long a wait, access to marriage finally applies to all couples, regardless of gender or sexual orientation: "Same love, same rights". Marriage for all eliminates key legal inequalities for same-sex couples.

Since its foundation, Operation Libero has been fighting for this equal legal treatment. Opponents accused us of salami slicing. But we have never made a secret of the fact that marriage for all is by no means the last slice of salami in terms of equality and free choice of lifestyles. Just the aggressiveness with which marriage for all was fought and the fact that about a third of voters rejected it, partly for homophobic reasons, shows that homophobia is still omnipresent and still far too widely accepted.

However, the clear 'yes' is a clear hint that the majority of society is much more open and progressive towards diverse forms of life than our legal system, which is strongly based on a conservative family model, may suggest. Indeed, marriage for all is just a small step towards adapting the political and legal conditions to the social realities we live in. The ‘yes’ to marriage equalityl will boost these next steps.

Providing legal recognition to the diversity of lifestyles

Individual freedom, self-determination, and equal opportunities are key liberal concerns. They must also and especially apply to ways of life that deviate from the norm. A liberal state allows for diversity and respects private decisions. It is not the task of the state to privilege certain forms of relationships and life over others.

However, structural constraints and discrimination, as well as prevailing understandings of gender roles, family models and sexuality. The Swiss legal system is largely based on a very traditional family model: for example, tax law with joint taxation of married couples is still based on an economic model and a system of values model that perpetuates asymmetrical gender roles and does not do justice to the diversity of lifestyles and family configurations.

The four next salami slices

For these reasons, we demand that all consensual forms of relationships and family models - whether same-sex or opposite-sex, married or not - become equally possible. Marriage, with its long history as a central instrument of patriarchal power, must no longer be considered the standard model. It must not be privileged, either legally or financially, over other forms of cohabitation.

In the coming months and years, Operation Libero will campaign for the following demands on the path to real equality:

1. Individual taxation
Individual taxation eliminates unequal tax treatment between couples by the state.
2. Regulated cohabitation
We support the introduction of regulated cohabitation for unmarried couples - possibly modelled on the French PaCS (Pacte Civil de Solidarité).
3. Simplified parenthood
Legal parenthood, adoption and reproductive medicine should be open to all people, irrespective of marriage or a couple relationship, under the guiding principle of the best interests of the child and the fundamental rights of all concerned.
4. Modern sexual criminal law
We demand modern sexual criminal law, in line with international standards and obligations, that leaves behind completely outdated notions of sexual violence and protects sexual self-determination, not outdated moral concepts.